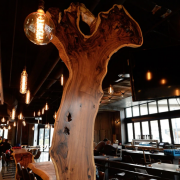 The modern-day food hall — a dining concept that has been popping up in cities across the country — has arrived in Utah.

HallPass, an 11,000-square-foot space with eight dining options under one roof, will open just before Christmas at the south end of The Gateway center in Salt Lake City.

Diners will find an eclectic lineup of foods from street-style ramen and crispy chicken sandwiches to fresh seafood and sweet and savory waffles.

The casual, open setting — yet another popular food trend — allows diners to get a fast-casual lunch during the workweek or a quick dinner on the weekend before a movie or comedy show.

Guests may feel comfortable lingering, too, thanks to the welcoming restaurant-style decor at HallPass. There are golden acacia wood tables and chairs from Thailand, colorful murals, a fireplace and a full-service liquor license, which allows beer, wine and cocktails with the food.

Clearly, this is not your parents’ 1980s food court — where shoppers wolfed down pizza, corn dogs and other fast-food items at sterile cafeteria tables.

The Ferry Building Marketplace in San Francisco and Chelsea Market in New York are two of the most famous food halls in the U.S. But in the past five years, dozens of similar food halls have opened around the country, many in multiuse developments similar to The Gateway.

It’s such a hot trend that the real estate trade journal GlobeSt. declared 2019 “The Year of the Food Hall.”

“What began as a trend that was largely relegated to just a few markets has since exploded,” the company explained in its 2019 report “Food Halls 3.0.″ “When we first began tracking this phenomena in 2016, there were roughly 120 projects across the country. That number is on track to nearly quadruple, with 450 food halls expected to be operational throughout the United States by the end of 2020.”

With many large retailers filing for bankruptcy or shutting down altogether, food halls provide a stable anchor tenant in residential and mixed-use developments, shopping malls and office towers, the report noted. They also attract consumers “hungry for authenticity and an experiential lifestyle.”

Declining foot traffic and the loss of key tenants had at one point pushed The Gateway’s vacancy rate so high, it met some industry definitions of a “dead” mall.

Vestar has since sought to “de-mall” the site, converting it into a kind of urban lifestyle playground and creating social, cultural and artistic experiences to appeal to millennials — while also keying off existing tenants such as Wiseguys Comedy Club, Clark Planetarium, Discovery Gateway Children’s Museum, The Depot and Megaplex Theatres.

The completion of the food hall, Briggs said, “feels like [the transformation] has reached critical mass.”

In addition to HallPass, two other eateries have opened at The Gateway in recent weeks: Mr. Shabu, an Asian hot pot restaurant that specializes in Shabu Shabu style dining; and Momi Donuts, another Asian-inspired treat made with rice flour and tapioca starch.

All the the eating options inside HallPass are created by SkinnyFATS, a Nevada-based company with six locations in and around Las Vegas and one new store in Dallas.

As its name suggests, the SkinnyFATS menu is split between items that are 600 calories or less and higher-calorie comfort foods. For each “healthy” yin, there is a “happy” yang.

“We want to give people plenty of options,” founder Reed Allen Slobusky said during a recent tour of the space, “and let them gravitate toward what they like.”

For the other seven food spots at HallPass, chefs took popular SkinyFATS menu items and spun them into their own concepts.

For example, Blaze of Thunder, SkinnyFATS’ hot chicken sandwich, now has its own expanded menu that also includes wings and chicken pieces.

Other spinoffs include Waffadopolis with sweet and savory waffles and a tableside guacamole option.

HallPass also has a “one tab” system that allows families and large parties to eat at different concepts but still pay one bill.

While it may be the first food hall in Salt Lake City, it won’t be the last. A similar establishment — called a food alley — is under construction at 800 South and State Street. It is expected to offer more than a dozen restaurants that serve ethnic foods and have refugee owners.