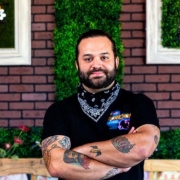 SkinnyFATS is teaming up with one of the most talented and sought-after chefs in the country to introduce a variety of all-new concepts at HallPass, Utah’s first and only food hall located at the Gateway in Downtown, Salt Lake City. Following a successful year operating Graffiti Bao and other concepts at T-Mobile Arena and the new Raiders’ stadium in Las Vegas, Marc Marrone and Todd Lunger of Graffiti Hospitality will join forces with SkinnyFATS, with Marc becoming the new chef-partner at HallPass. Together, they will launch Graffiti Bao’s first out-of-state location as part of the food hall’s new restaurant portfolio debuting mid-October.

Marc will also helm a new restaurant concept called Hibachican, a dual hibachi concept featuring a playful balance of Japanese teppanyaki, tartare and small plates alongside Mexican tacos, aguachiles and house-made chips, guacamole and assorted salsas. The best flavors of East and West will collide as some of the dishes draw inspiration from both cultures, with al pastor yakitori, garlic soy teppanyaki tacos and more rounding out the new menu.

Next door, guests will be able to satisfy their sweet tooth with an epic selection of swoon-worthy, hand-crafted treats from Waffadopolis, the ultimate dessert shop in Salt Lake City. Bringing wonder and delight to guests with a uniquely customizable experience, the confectionery will feature house-made waffle cones with flavors such as black sesame and classic; individual sweets, including Instagrammable unicorn cakes; a build-your-own-ice cream bar; over-the-top shareables and more.

“SkinnyFATS was built on constant evolution of the menu, and HallPass essentially functions as a massive R&D facility for that. Having Marc at the helm will bring HallPass to its full potential in both creation and execution,” says founder Reed Allen Slobusky.

“I’m excited to partner with Reed at HallPass and bring Graffiti Bao to Salt Lake City,” adds Marc Marrone, chef-partner at HallPass. “HallPass has already established itself as a staple in Salt Lake City, and what we have rolling out will further solidify that. Having seven different kitchens to play around with isn’t so bad either.”

Graffiti Bao, Hibachican and Waffadopolis will join five other eateries and bars at HallPass, including SkinnyFATS and Beer Zombies Draft Room & Beer Garden, created by founder Chris Jacobs, who has echoed Reed’s excitement in working alongside Marc at Beer Zombies in Salt Lake City.

HallPass, a new food hall, will open in Salt Lake City this month