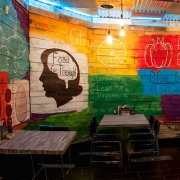 The Skinny on the New SkinnyFATS

Want a menu that lets you choose between eating healthily or indulgently—and points out which is which? That option could soon be coming to a neighborhood near you. SkinnyFATS, a casual three-meal restaurant in the commercial area of Dean Martin Drive, is expanding, starting with a new spot in the southwest. Its current space seems to be constantly bumping despite its nondescript location, thanks to a fun and innovative menu that allows guests to eat well from both the “Happy” and lightened-up “Healthy” sides. For example, the Chipper Morning breakfast sandwich (Happy) features scrambled eggs, bacon, cheddar and tomato on a brioche bun, but those counting calories might opt for the Fresh Morning (Healthy), with egg whites, spinach and turkey bacon on a honey-wheat roll.

The new location, tentatively set to open in April, is in a more residential area near Durango Drive and Interstate 215, according to SkinnyFATS owner Reed Allen Slobusky—a potential boon to the restaurant’s delivery business. The new digs will be much bigger than the original, Slobusky says, with an outdoor area for al fresco dining. SkinnyFATS fans can look forward to the kitchen rolling out a new menu at both spots, and then after that? Keep an eye out for perhaps even more SkinnyFATS this year, and early next.

Early Adopter In Our Startup Restaurant