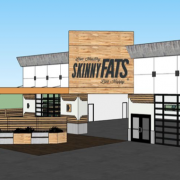 Once hoped to be serving in Henderson by “summer ’17,” local favorites SkinnyFats now promises that it’s “coming soon” to the neighborhood and has released the address of the new venue.

The home of healthy or “live happy” menu choices has taken over a 4,317-square-foot former Bank of Nevada at 221 N. Stephanie St. On the opposite side of the Stephanie Promenade sits Metro Diner, which launched last September.

This marks the fifth local outpost for the home of SkinnyFat’s quirky all-day breakfast creations and renderings provided by local design team BunnyFish Studio indicate guests will be able to enjoy a “Chicka Wafa Dopolis” out on a new patio.

A previously reported expansion at Henderson’s Beltway Plaza is currently listed as “available for lease” and is not referenced on the SkinnyFats website.

The aggressively growing company may also be moving to Spring Valley. Local developer Dapper Companies is working on a huge retail and leisure hub known as The Bend, located at the corner of Sunset Road and Durango Drive.

Directly facing the Ikea superstore and anchored by a Galaxy movie theater, an early leasing brochure lists Skinnyfats joining Johnny Rockets as a casual dining option. An estimated arrival for the ambitious venture has yet to be announced.

SkinnyFats No. 4 Is on Its Way