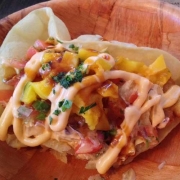 On the Inexplicable Popularity of SKINNYFATS

If you want to know what’s wrong with the Las Vegas restaurant scene, look no further than the unexplainable, head-scratching popularity of SkinnyFATS — an office-park, hole-in-the-wall, “concept” operation off Dean Martin Drive that serves junked-up, under-seasoned and over-thought food that mimics the faux-industrialized interior and fake tastes of its customers.

It is food perfectly geared to a generation that thinks it’s smarter than it is.

It is food that doesn’t have a clue about quality.

It is food that gives the clueless poseurs of the Millennial Generation the cuisine they deserve.

Where oh where to begin?

Let’s start with the customers, shall we?

In order to order here, it appears that you must a) wear nothing but skinny jeans and t-shirts, and b) convince yourself that more is more when it comes to whatever you’re stuffing in your pork pie hat…er….uh….hole.

Now, a more reasonable sort might argue that SkinnyFATS does the business it does because it’s the only game in town — or at least the only thing edible on this forlorn stretch of single story office slabs along this parallel artery to the Strip. But Eating Las Vegas understands that you do not come to this Web site for reason, but for (generally) thoughtful, fulminating-yet-fulsome invective….and this place inspires it in droves.

First of all, it’s a f*king takeout counter. (Heaven forbid all those hipsters actually have to speak anyone not as cool as them for longer than they have to.) Secondly, it seats like, 18 people (actually, more like 36, but let’s not let facts get in the way of a good rant.) Thirdly, ordering is a nightmare. The menu has like, 100 things on it; it’s divided between a “healthy” and “happy” side (apparently, being healthy and happy simultaneously never occurred to the dimwits behind this concept), and navigating it takes the eyes of an Indian scout (the print is none too large) and the skills of a Portuguese sailor. All of which needs to be done while you listen to people ask such scintillating questions of the poor sap taking orders as: “What’s better, the Drunken Monkey Cakes or the Drunken Gypsy toast?” (In case you couldn’t guess, cutesie names are as necessary to sell this dreck as the hyperbolic health hullabaloo.

As for being the only eatery for miles, true enough that, but one doesn’t get the sense that its patrons are here but for a lack of options — or out of a sense of resignation like you get inside any Subway or chain sandwich shop. No, these customers think SkinnyFats serves really, really good food……just like they think this is really, really good music.

But you’re there at the behest of a foodie friend, so you sucks it up and you takes your chances. Being a critic, you go for the basics: Can they make an edible burger? Can they compose a tasty taco? Is the kitchen challenged by a simple salad?

The answers are no, no and sort of.

Everything, and we mean everything on the menu is is overwrought to the nth degree, i.e., loaded with lots of ingredients and very little thought. For example, here’s the menu’s description of the Cheeseburger Benedict: “1/2 lb. Angus burger, w/ lettuce, tomato pickles, cheddar, avocado, red onion, fried egg and SF sauce.”

You would think, with that moniker and laundry list, the cheeseburger would bear just the slightest hint of eggs-y, Benedict-y savoriness. You would think that of course, and you would be wrong.

Amazingly, in a feat of magic befitting David Copperfield, the burger tasted of none of these — and barely tasted of burger. “There’s supposed to be a fried egg in here,  but I couldn’t taste it,” said our foodie friend. “I could see it, barely (ELV blathered), but the whole thing just tastes like a pile of overcooked, unseasoned meat mush,” he replied.

And so it went, throughout the whole circus of descriptions and funeral of flavors.

The tacos (both the Ahi Sirachi and the Ahi Taco-san) were no better. One was supposedly loaded with “Slaw Chee(?), mango pico, spicy aioli & teriyaki,” How SkinnyFATS  manages to trumpet yet avoid all of these flavors is a question best left to minds smaller than ours.

….deep fries everything but the mangoes and the tomatoes and still manages to pull off the flavor-free hat trick.

We present this picture by itself because good taste prevents us from offending our readers’ sensibilities with any more photos than we have to. Suffice it to say, every plate comes out of the kitchen heaped with ingredients and drizzled with this or that — more likely drizzled with this and that — none of it to any great effect. It’s  just the sort of food you’d expect to appeal to people who party like this.

They also must like drinking stale-tasting, dirty-looking apple juice….because ours tasted as dirty as it looked.  On the plus side, the chocolate chip cookie was pretty good.

You have been warned.

Early Burger Review…”They were good before they were great.R...
Scroll to top