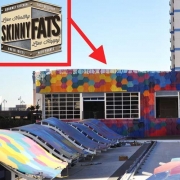 Exclusive: SkinnyFats Plans a Third Location on the Strip

Las Vegas just can’t get enough of SkinnyFats, the restaurant where half the menu features healthy fare and the other half not so healthy stuff. The restaurant opened a second location in October in the southwest, and now is ready to unveils its first foray to the Strip.

SkinnyFats confirms that it plans to open “5,000-square-foot of amazingness” in late February at the Grand Bazaar Shops, the shopping center going in at the front of Bally’s Las Vegas.

Reed Allen Slobusky, one of the partners in SkinnyFats, says the restaurant will be open 24/7 with 140 seats overlooking the Strip.

“Our cold pressed juices will fuse a drinks menu unlike anything the city has seen. We are very excited to be part of the Grand Bazaar Shops and look forward to everyone experiencing what we have been working on,” he tells Eater Vegas exclusively.

SkinnyFats takes up the entire second floor of the building on the left of escalator butting up to Flamingo Road as well as the far right side of the first floor.

“Prepare to taste mouthwatering food in an environment full of life.&...

SkinnyFats Has The Skinny — And The Fats
Scroll to top